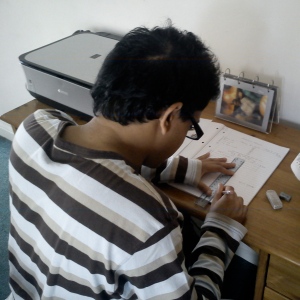 The next group of assignments I was given was really a folio in itself. I had a number of mixing tasks to complete as well as some other interesting research projects. This was all in aid to show that I could make progress in the areas of sound engineering that are relevant to a typical freelancing composer.

I am going to start by talking about the Mix Analysis exercises. I first had to choose ten recordings that I liked. I originally had quite a wide variety of material but managed to narrow it down to ten tracks, some from my favourite styles (ambient and giltch) as well as others that I was interested in sonically.

Next, my teacher informed me that I was to create a mix analysis template and analyse the ten tracks to help understand how the music was mixed. Now, when it comes to mixing, it can refer to a number of things and when I had to create the template, I had to think about how I wanted to design it.

Music made using computers are usually mixed in a typical way whereby:

What you see above is my finished mixing analysis template, and also what it looks like once its been filled in. When it comes to analysing the volume and pan, this is mainly judged on critical listening as you only have an audio file of the song, and not the project file with all the individual sounds. When it comes to the frequency of each sound, even though they are all mixed together in the song, there are ways of finding out where they are placed. 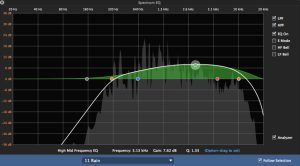 I used a combination of filters and EQ to narrow down where I considered each of the main sounds to be. At first this takes a little bit of practise, but as you develop, you can start to guess where the sounds are placed just by focusing your attention on them.

I found this exercise really interesting to do, as I learned a lot of the techniques in how songs are mixed. For example in pop songs, the vocals are given a very wide frequency range compared to other styles of music. Another technique I picked up was that the kick and hi hat sounds are usually placed at the very extreme ends of the frequency spectrum.

I was also given two research projects to do and I found these really fun, mostly because it was a break from making and analysing music and more related to sound enginerring. The first project was to research Acoustic Treatment Techniques and apply them to a small project studio.

I talked to my teacher about how to go about this and he gave me some good advice. He told me that I could base the studio on my bedroom and that I should keep in mind what I was likely to record in the studio. These pointers really helped me understand what I needed to achieve.

As you can see, I started by including a base room plan, identifying the main components of the room. I then proceeded to outline the possible placements of the panels which would help even out any uneven frequencies across the room. The reason people acoustically treat a room is so that when it comes to listening and mixing on your speakers, you are able to hear things more accurately. When the room does not lend itself to this application, sound can often reflect and bounce off the walls.

I found this project really informative as I again learned many techniques in how sound travels within a room. For example, bass frequencies tend to build up in the ceiling corners of a room. Sometimes you can run into comb filtering problems when frequencies combine and cancel each other.

The next research project looked at Microphone Techniques and where you would place them when recording instruments. I was told to create four guide sheets relating to different instruments. I found this project highly useful as there are a number of different places you can put a microphone and each recording can give a different result.

I spoke to my teacher and he said that it would be good if I chose instruments that were relevant to me. I ended up choosing the piano, voice, acoustic guitar and drums.

This was a good exercise to do as I learned that with the drums, apart from close miking each drum, you can use another technique called open miking. This is when you use a pair of overhead microphones as the main recording source. Another useful technique I found was that when miking an acoustic guitar, you can use a pair of microphones where each microphone points at either side of the sound hole.

Some of the assignments in the essential skills folio also included creating a number of mixes, but as this includes the next assignment I was given, I will talk about it further in my next post.

All the best, Jamie

This site uses Akismet to reduce spam. Learn how your comment data is processed.